“We’re in such a unique time, where technology is accelerating at an insane pace. You can barely jump on the internet without seeing a new discovery, or incredible technological advancement. I think the next 10 years are going to be critically important.”

In this podcast I talk with Taylor about being a green entrepreneur and how he sees conscious capitalism as a means to make much needed environmental changes in the world, and his belief that we will be able to solve the key challenges posed by climate change. We also talk about Taylor’s plans for launching a podcast, what gives Taylor hope and keeps him going when things look dark, and what advice he would offer listeners about what they can do to be part of making a difference in meeting the challenges of the Twenty First Century Imperative.

The first time I met Taylor I was immediately impressed by both his quick mind and his wide range of interests.  What was supposed to be a quick introductory lunch turned into a two-hour conversation!  And our conversation ranged from the story of how he started his business of developing a highly innovative and environmentally smart permeable paving system, to bitcoin and crypto-currencies, to how to plan smart green cities, to surfing techniques, high-intensity-training, and the effectiveness of various nootropic supplements, and to his underpinning business philosophy of “conscious capitalism.”  And I don’t think I’ve had a conversation since, with Taylor, that has been any less interesting or wide ranging!

Taylor is an experienced entrepreneur and innovator with a strong track record for creating, and brining new products to market. As early as grade 11 he started an e-commerce store during his comm-tech class, and then, while studying neuroscience at Dalhousie University from 2007 to 2010, he began designing and selling cognitive nootropic supplements, as well as launching an asphalt maintenance company to pay back his student debt.

Early in his career Taylor used software, digital strategies and his experience in contract manufacturing to create new asphalt maintenance and paving products. He joined Shopify as employee 132 in 2013 to test-drive the 9-to-5 work-week but was drawn back to innovating within his own businesses.

In 2018 he became accredited for scientific research and development in green infrastructure technology and is a Funded NRC-IRAP Scientist.  Taylor is currently the CEO of PurePave Technologies, and the President of Smart Green Cities Inc.  Endlessly curious, fascinated by the power of new technologies, and the transformative influence of the internet, Taylor is passionate about advancing material sciences and software that improve the environmental quality of cities, and reduce the escalating impacts of climate change.

Apart from the fact that Taylor is such an interesting person and successful entrepreneur, I wanted to interview Taylor because of his passion for harnessing business as an engine to tame climate change.  Indeed, if our species is actually going to be able to pull back from the brink of climate disaster, not only will we have to have scientists and policy makers providing solutions, but we will also need to enlist the energy and resources of the commercial world.

Here I think Taylor is a great role model, and in today’s podcast we explore his philosophy of “conscious capitalism,” where good ideas come from, important lessons from his experience starting and leading a company manufacturing a stormwater and flooding mitigation system, and what he thinks are the greatest opportunities for moving the needle on addressing the challenges of climate change.

What Taylor Thinks About Opportunities For Adapting To The Impacts Of Climate Change:

We’re in such a unique time, where technology is accelerating at an insane pace. You can barely  jump on the internet without seeing a new discovery, or incredible technological advancement. So, I think the… next 10 years are going to be critically important. And technology I feel is on our side here. The opportunity is for businesses and individuals to pay attention. I think that by paying attention to technologies that can be applied to improving the sustainability of cities, or the country, or your own home, we can not only get a little closer as individuals, but much closer overall as a network of human beings coexisting, and implement necessary solutions. 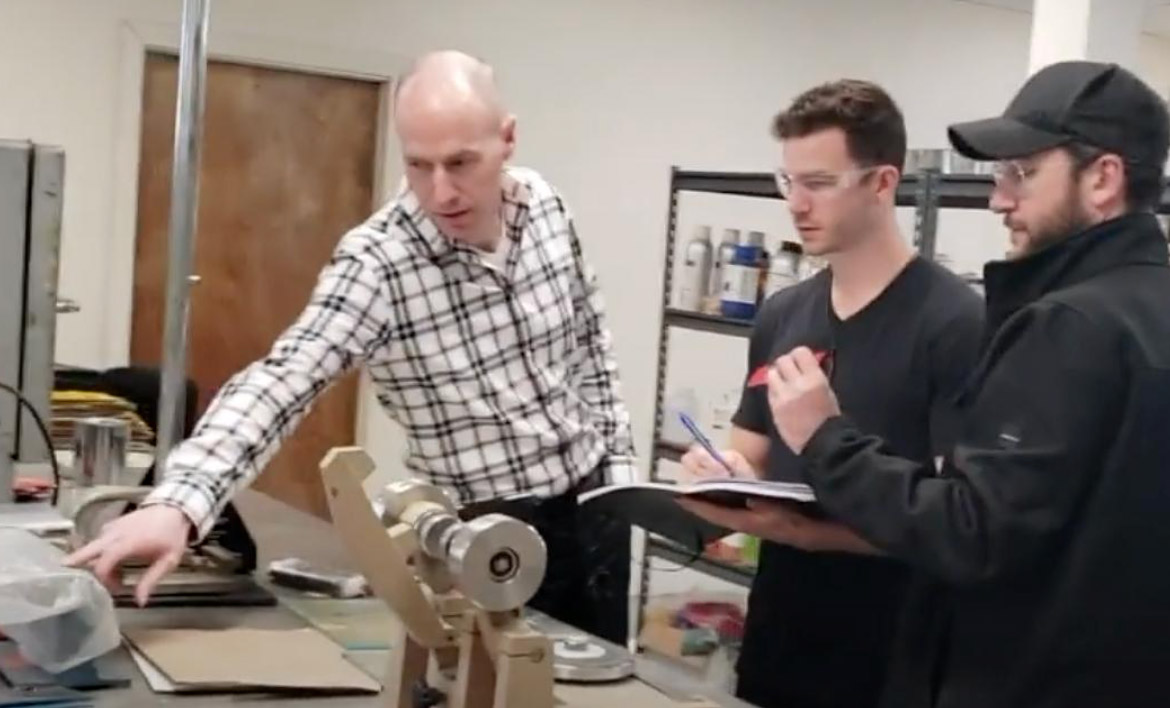 Taylor (middle) in one of Purepave’s Polyurethane R&D Lab, 2017. (Photo by Sanad Nashad)

What Taylor Thinks About The Opportunities To Use Blockchain And Cryptocurrencies To Deal With Climate Change:

I really see the tokenization of real world things becoming quite interesting in the future. There’s a lot that could be done there. You could, for example, and this is a little out-there, but you could, in theory, add a secondary layer of climate commerce over  the existing economy.. What that would mean is, you could attach, say, a net positive and net negative carbon value to almost everything. So, if you wanted to buy a jet, it costs money right now. But it could also cost some climate tokens. Where do I get my climate tokens to buy a jet? You buy them from climate token “farms”, or earn them yourself by doing carbon positive activities that have been approved on smart contracts. So right now, there’s sensor technology that can monitor trees being planted for individuals working within farms that awards the individual working in the farm real dollars, in exchange for their work and time planting trees. That’s a climate positive activity for the individual. However, the farm itself has now effectively mined these climate tokens and can list them for sale on an exchange, making them available for those who need to offset their carbon, as suggested for their purchase of a jet.

So as long as there’s smart contracts, where governments, or whomever the controlling engineer would be of the system, have gotten together, and they’ve placed appropriate carbon values on items that apply in advance  so that it’s known as to what climate token value to charge in conjunction with the dollar cost  of something, you’ve created a closed loop system that could be overlayed onto the economy.

It’s all open and transparent [using blockchain]. And anyone and everyone can verify the transactions, what you’re ultimately doing is incentivizing climate positive action and helping people who are less fortunate, who may not have another job, get rewarded economically  while allowing the free market to allocate resources toward enhancing our environment instead of leaving it in the hands of government. 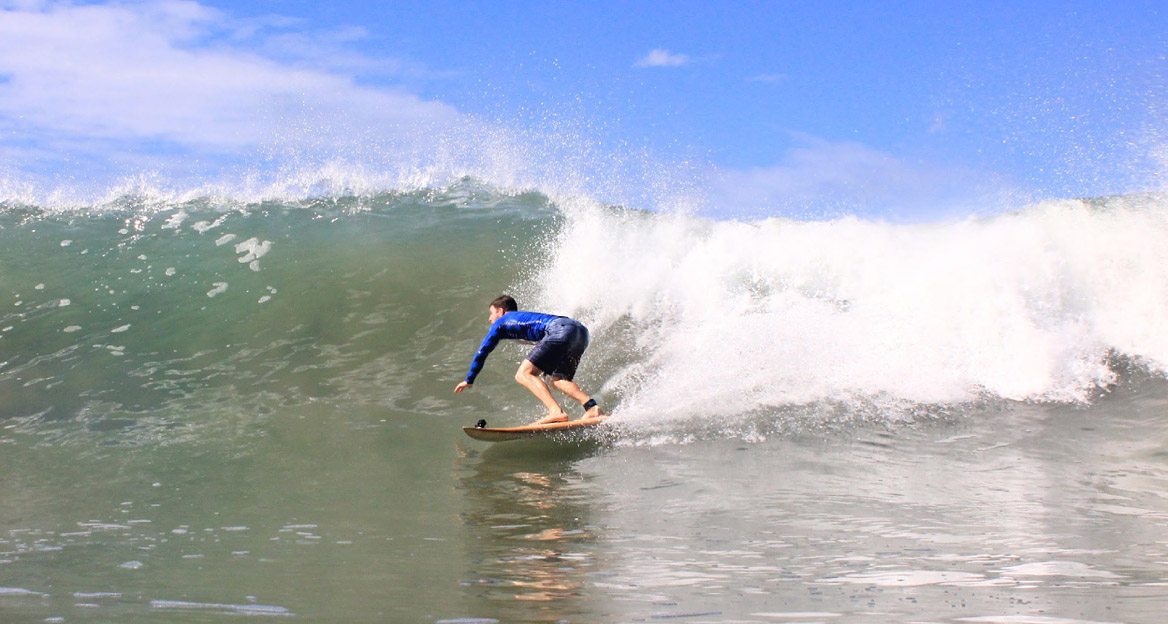 Taylor catching a wave at SantaTeresa in Costa Rica, 2018. (Photo by @waves_art_photography, Instagram )

What Taylor Thinks About Progress:

Progress is fundamentally what gets me excited every day. I measure progress in every possible way that I can. It’s exciting to do a little better on anything, no matter how small it is, whether it’s like tracking my sleep on an app, exercising, discussing new  ideas, etc . Progress  in general is necessary but it’s also a lot of fun.

What Gives Taylor Hope When Things Are Looking Dark:

Yes, definitely, we’re going to be able to do it 100%. I’m not living in the world where we can’t do it. There’s absolutely no way. Even though it seems like the problem is stacked quite high, I remain so excited with all the new technologies that are being developed, with the increasing adoption of human networks that are coming together in remarkable ways, where we start to operate almost as like a beehive. Right now, it seems like a negative way with Facebook and  social media, but there are smaller digital ecosystems   developing in really positive ways. And I think that’s where we’re going to see the pendulum swing back in the other direction. People are going to feel how crappy social media ecochamber experience is , and start seeking out different types of networks to create this positive change, that have a synchronous relationship with new technologies and the environment. And I really am one of these people who envisions the solar punk world where we’ve made a sort of technological, environmental utopia. And we’re all existing in a world where it’s still possible to go surfing and we have cool tech at the same time. The entire continent is a closed loop energy system. There’s no leakage, no waste.

And so, this really gives me hope, in conjunction with focusing on myself. It sounds selfish, but nobody ever changed for the better as they were falling apart as a person, focusing on how awful everything is. So, one of my strategies when I personally get down or things start going in a shitty direction is to focus on my cognition. And what I mean is just pay attention to the actual hardware that’s powering our whole experience.

What Taylor Asked of Listeners:

I would ask them to search for cool tech  and think about how it could be used to enhance the environment. Search for cool things being technologies, systems and platforms, and how they tie together to not only offer one benefit, but a multitude of benefits that result in a  a closed-loop of something that overall is going to help stimulate change in the positive manner. And the way that you can do that is just by jumping on the internet, because it’s free, and use your intellectual curiosities, follow them, save links, keep them open on your browser and eliminate ones that suck after a while.

Links Referred to by Taylor:

How You Can Connect With Taylor: