“The future beckons us to repair, to restore, to maintain, to reserve resources, to rethink our fundamental imagination of where we should live and how we should live.”

In this podcast I had the great pleasure of interviewing Rahul Mehrotra. I first met Rahul when we were both graduate students at Harvard’s Graduate School of Design. What I remember most about first meeting Rahul was his sparkling intelligence and totally unpretentious manner, combined with a gentle sense of humour.

Rahul is a practicing architect and educator, splitting his time between his professional practice in Mumbai, and teaching at the Graduate School of Design at Harvard University, where he is a professor and Director of Urban Design program. Rahul has executed a wide range of projects across India, and has also written, co-authored and edited dozens of books on Mumbai, its urban history, its historic buildings, public spaces and the planning process.

Rahul first studied at the School of Architecture in Ahmedabad, India, where he received the gold medal for his undergraduate thesis, and then at Harvard’s Graduate School of Design, where he graduated with a master’s degree in Urban Design (with distinction). He has taught at the University of Michigan (from 2003–2007), the School of Architecture and Urban Planning at MIT (from 2007-2010), and at the Harvard Graduate School of Design, where from 2010 to 2015, he Chaired the Department of Urban Planning and Design, and is currently Director of the Urban Design Program.

In 2012-2015, Rahul led a Harvard University-wide research project with Professor Diana Eck, called “The Kumbh Mela: Mapping the Ephemeral Mega City”, which was published as a book in 2014. He extended this  research in 2017 in the form of a book titled: Does Permanence Matter?  In the context of the Twenty First Century Imperative, both these research efforts offer important insights into how we might address the future impacts of climate change and the anticipated dislocation of large populations of climate refugees – with the UN now estimating that the world will see over two-hundred-and-fifty million climate refugees by 2050.

In our podcast I talk with Rahul about the social and environmental purpose that underpin much of his work, as well the important insights he has gained from his research of the Kumbh Mela, and later explorations of impermanent habitations that may provide us with important understandings for how we might more effectively respond to future large-scale migrations of climate refugees.

Rahul and team at work in RMA Boston Studio

In addition to his research explorations, Rahul is a world-renown architect, with many significant built projects to his name.  For me, two of his architectural projects stand out as being most emblematic of his important contribution to addressing the challenges of the Twenty First Century Imperative.  The first is his wonderful social housing project for 100 elephants and their caretakers in Jaipur, India. 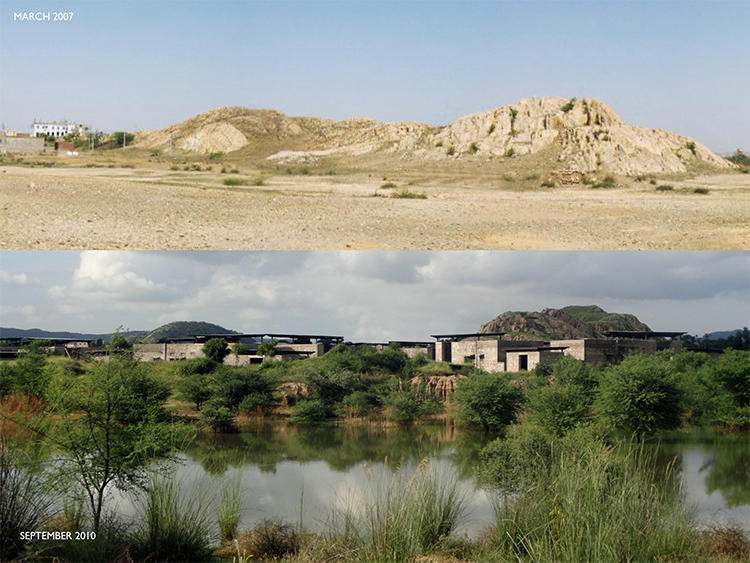 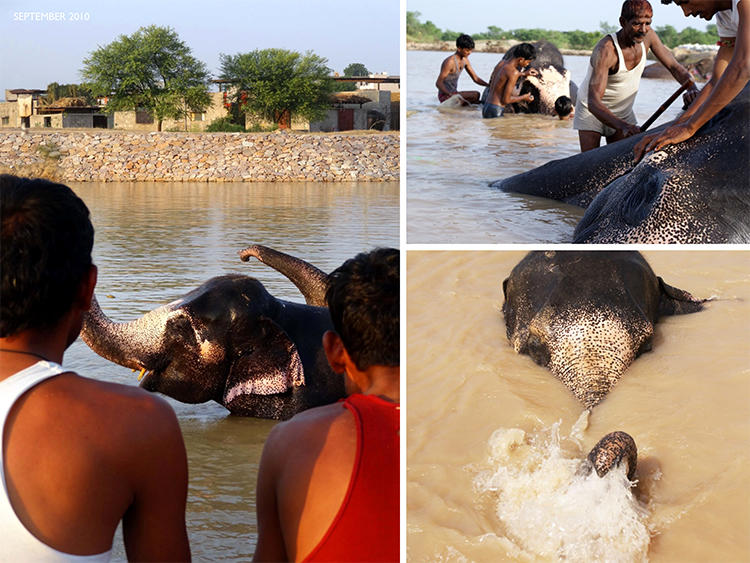 Elephants and their keepers at Hathigaon site (photo by RMA Architects)

This project involved transforming a former sand quarry into a wetland ecosystem to provide a livable habitat for the elephants as well as dozens of other animal and bird species. By creating a wetland that captures and stores yearly Monsoon rains, this project successfully regenerated a seriously degraded environment, as well as contributing to helping the site to adapt to the future impacts of climate change.

Rahul describes this project as “truly one of the most challenging projects that we’ve actually dealt with” and goes on to say that: “this was a condition where the demography was among the poorest in the country, in this case they were Mahout’s, or elephant keepers from the Muslim community which is a real minority in the state of Jaipur, which is a largely Hindu population with a Hindu right-leaning government.” The project was focused on repairing and regenerating the ecology of the site. As Rahul describes: “It was really essentially about creating a landscape which would make a habitat where elephants and their keepers could survive – because the volumes of water that elephants need is enormous. So this was a case where we really engaged with repairing, regenerating, and privileging landscape and the existence of water, capturing water, making place for it, creating the humidity that you needed for these tropical beings to exist, and then placing architecture in the interstitial spaces, rather than the other way around, where we often, in our impulses as architects, design the built environment, and then place landscape in the interstices. So, it was really a project about reversing that. It was about also reversing what might be the business-as-usual approach to a project like this, but it was also a project which implicitly empowered a low-income community by giving them great access to water.”

The second project that stands out is the design of the MC Corporate Office Complex in Hyderabad that included a living façade supported by a modular screen of recycled cast aluminum panels. This project created a wonderful place of work by surrounding the building envelope with a screen of flowering vines to help mediate the climate between inside and outside the building. 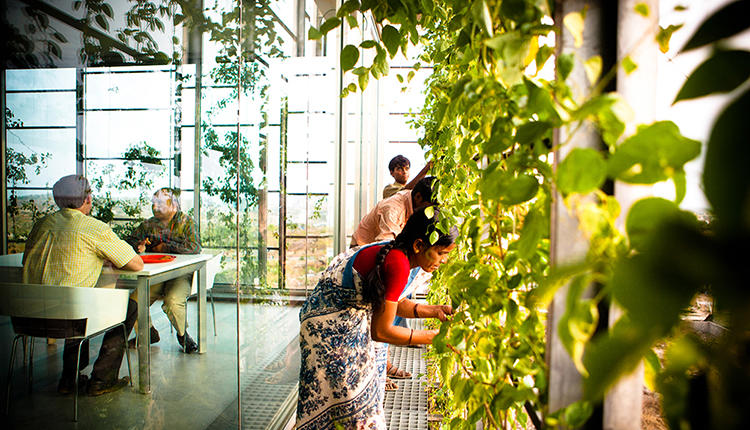 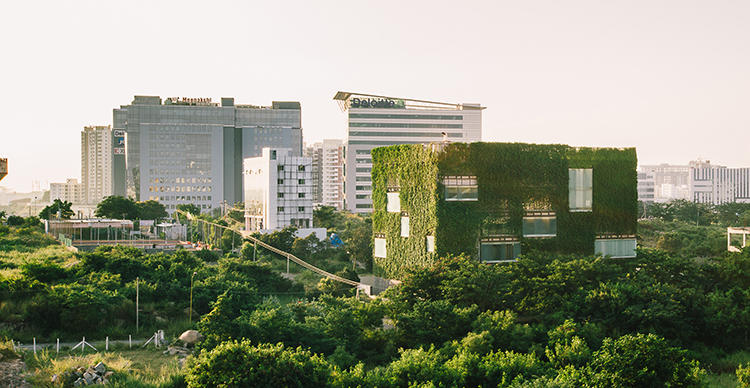 Rahul describes the project as a low-tech solution to a complex environmental challenge: “The project here was about showing how a kind of low tech solution, which recycled aluminium was used to create a hand-made trellis in a small factory which hand-crafted it. Then we grew vines to create a second skin, which had a misting system in it which humidified the façade which allowed air to move through it. It not only constructed a new identity for this corporation (which was a construction sort of company), but also made for the green façade, not as a symbolic green façade but as a performative green façade which actually cools, humidifies the building, but also feels like it’s kind of grown out of the place.”

This project is a good example of how to use natural capital – the vines on the screens – to not only moderate the local climate, especially the temperature extremes, but also as an adaptation to the future impacts of climate change such as the increases in heat and perhaps aridity.

However, Rahul notes that one of the most compelling and unintended consequences of the project was its social impact:  “For me, one of the most beautiful unintended consequences of this project was its social dimension, which I honestly hadn’t anticipated till the building began performing — which is that suddenly the gardeners, who are the poorest paid in a corporation like this, were really, actually, empowered. There was great empathy for them because now the façade and the very identity of the building depended on the poorest paid employees of that company. Now they roamed the whole façade because we [had] created a cat walk and they can look their bosses in the eye. They dress beautifully and there’s much more empathy for them, and their position in the corporation, I think, went up a few notches, and I’ve experienced this, and I talked to the owners of the company. I can’t tell you the gratitude that they have to the gardeners: people working in the office building make friends with the gardeners to get a bouquet of flowers for their wife.”

Advice Rahul Had For His Students

“Don’t get trapped in a model of practise which is a model where we set up our offices and wait for a client to knock at our door, but rather, identify the problems, and then find the constituency that will support you to make that happen. Because, I think we are trained to be able to seek those problems out. We are often accused of being guns for hire, yes, and that’s a legitimate accusation, because of that model of practise where we wait for someone to knock on our doors and then we go and serve whatever perception of the problem they have. Whereas, I think we are individuals, we are citizens, we are part of a community first and before we are architects, and therefore, for us to define those problems, and to understand, and to surface, and to articulate them, is as important.”

Advice Rahul Had For Listeners

“I would just say: work more collectively. I mean, I think it’s again contingent upon on us to become part of our communities, and work more actively if you’re part of a democracy, or, find any other way that the collective and the commons can be put in the centre of any discussion, and weigh any proposal for climate change as a response for political decisions to be part of a collective. We’ve got to get away from giving expression to the powers, which are the marginal 1% on the globe, which control the wealth, globally, and this is not just North America, it’s India, it’s China. I think we are putting too much power in the hands of very few people whose motives are only more greed. So we’ve got to correct this imbalance, and this overpowering presence of greed concentrated in the hand of very, very, very few people.”

Books and Articles Recommended by Rahul

Books Referred to by Rahul

You Can Learn More About Rahul at: