Episode 009 | Dale Prest: Sustainable Forest Management and the Fight for a Stable Climate

“About 20% of the human’s contribution to carbon in the atmosphere is from how we’re treating our forests!”

In this podcast I talk with Dale Prest, CEO of the Climate Forest Company (CFC). We talk about the global carbon cycle and our future ability to reduce both greenhouse gas emissions and existing atmospheric concentrations of carbon dioxide through more effective forest management practices.

As the CEO of CFC Dale explores and devises strategies to fight climate change through sustainable forest management, for example, by incenting maritime woodlot owners to manage their forests to store carbon, and by creating innovative forest products that displace fossil-fuel intensive products like concrete and steel.

We discuss how the sustainable management of forests are an important opportunity for reducing atmospheric carbon dioxide concentrations – that are now over 400ppm CO2. Dale points out that current clear-cutting practices by many of the world’s large forest harvesting companies accounts for 20 percent of atmospheric CO2 emissions, and that simply by changing forest management and harvesting practices we could make a huge dint in our global greenhouse gas emissions. We also talk about the global carbon cycle, and our future ability to reduce both emissions and existing atmospheric concentrations of carbon dioxide.

Dale started CFC in partnership with New Brunswick-based Community Forests International (CFI), an award-winning international not-for-profit (you may recall that I interviewed the Chairman of Community Forests International, Jeff Schnurr, in our first episode which you can read more about in Podcast Blog 001). Dale worked with CFI for 5 years designing and building one of the only Improved Forest Management projects in Canada, showing how carbon emission markets can be used to rebuild degraded forests and fight climate change. This project demonstrated how fighting climate change can both restore our natural environment and strengthen rural communities.

Dale puts great value in the role healthy ecosystems play in a healthy society, and CFC was founded on the belief that forests are our most powerful allies in the fight for a stable climate. As the CEO of CFC Dale explores and devises strategies to fight climate change through sustainable forest management, for example, by incenting maritime woodlot owners to manage their forests to store carbon, and by creating innovative forest products that displace fossil-fuel intensive products like concrete and steel.

Dale has a BSc from Dalhousie University and MSc. form St. Francis Xavier University where he studied how soil nutrients change in forest soils related to forest management practices. Dale spends his personal time with family and friends in the great outdoors, hiking, canoeing hunting and fishing. 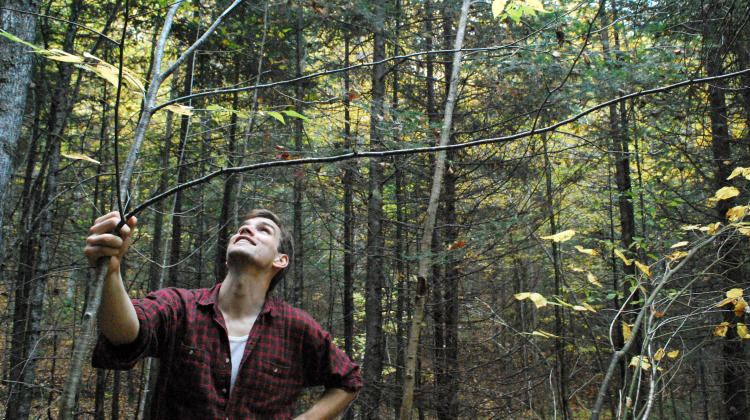 Dale Prest in a forest

“You know, people vote much more with their dollar than they do every four years in an election. Responsible consumers and educated consumption really sends seismic shifts through markets. Again, back to Patagonia as an example, you know, that company has such an unbelievably loyal following! After Trump got elected they decided that, for a day, they were going to take a 100% of the sales from their products on that day and donate them to environmental initiatives that had been defunded by Trump, and they sold $25 million dollars worth of goods in that day, because everyone showed up, and said, you know what, yeah, let’s do this. Whether it’s people that burn a little bit of firewood, ensuring that they get it from a responsible source, or sourcing every part of your life in a way that is true to you, and true to your values, it’s the way that we have the most power and I find it incredibly empowering to back people with my dollar.”

The Book Dale Most Recommends:

“The books that I most recommend or send to people are either incredibly inspiring, or incredibly depressing. There’s nothing in between. For inspiring books, it would have to be 1491 by Charles C. Mann. It’s a book that really changes your perspective, and the lens through which you look at North America, and the European settlement patterns. There’s been a lot of criticisms about Charles Mann’s approach, but fundamentally these books that call into question the fundamental ingrained assumptions and prejudices that we hold. 1491 is an incredible read.”

When asked what he would do if he were provided with a full-page spread in the Sunday New York Times where he could publish any written or graphic content:

“It would have to be related to the reality of how cheap renewable energy is… has become. The price curve on all those battery technologies – that’s the thing that people aren’t quite grasping. In a place like Nova Scotia, right now, the best case scenario on an installed solar PV system with the net metering program, you’re looking at around a 5% to 7% return on investment on rooftop solar installed on your house. You get locked into a 25 year contract with that, that’s not bad.

That’s actually all right when you’re talking about 25 years, especially if the cost of electricity is going to go up, because with that pricing scheme, as the price of electricity goes up, what you sell your electricity onto the grid for it goes up as well… When you can show people that in real terms, all of a sudden, they’re a climate change convert, they’re all for climate action! So Something around that is what I’d spend my money on with The New York Times.”

Below is a graph showing the exponential drop in price of PV solar power over time:

Books Discussed in this Episode:

Podcasts Discussed in this Episode: